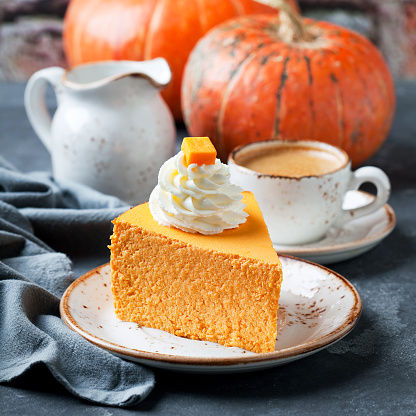 Cheesecake is just one of those desserts that most of us can’t resist. Have you ever had a piece of cheesecake that tastes like pumpkin? October 21 is National Pumpkin Cheesecake Day. We have found the perfect pumpkin cheesecake recipe for you to make at home. First though, how much do you know about cheesecake? We’ve included some fun facts so you can learn a little bit more about this delectable dish.

Fun Facts
– In 776 B.C. cheesecakes were given to athletes during the very first Olympic Games.
– Cheesecake is actually not a cake. It’s more like a pie with its custard like filling and crust.
-The main ingredient in cheesecake is cream cheese.
-There are many different varieties of cheesecakes including Philadelphia Style and New York cheesecake.
-The largest cheesecake on record weighed 4,703 pounds. It was made by Philadelphia Kraft Foods Mexico on January 25, 2009.
-The most expensive cheesecake is sold at Saks Fifth Avenue. Its mocha flavored, has a chocolate shell and costs $300.
-The most popular cheesecake toppings are whipped cream, cherries and chocolate. Less popular toppings are salsa, seafood and tomatoes.
-On the popular television show, “The Golden Girls,” the characters often consumed cheesecake as part of the story line. Over the show’s 7 year run, over 100 cheesecakes were eaten.

To make:
Preheat the oven to 350°F. Pour the ingredients into a bowl and beat with a mixer until thoroughly blended. Pour the mixture into the pie crust. Place into the oven and bake for about 35 minutes. Remove from the oven and let cool. Place it in the refrigerator, uncovered, for 3 hours.