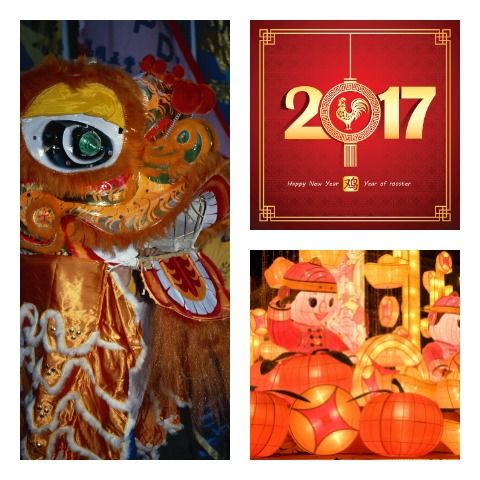 Chinese New Year is celebrated not only in China, but also in many countries across East Asia. It is considered one of the most important holidays of the year and is also known as the Spring Festival. Unlike the Western calendar’s new year beginning January 1st, the Chinese New Year is based on the lunar calendar. For 2017, the New Year begins January 28th.

Scholars believe that the festival may date back to prehistory, and the Chinese lunar calendar predates the Gregorian calendar.  Each year is represented by one of twelve animals in the Chinese zodiac. Supposedly Buddha invited all of the animals to say goodbye before his departure from this Earth, but only 12 animals arrived. Legend says that he then gave each of the 12 animals a year in their honor, representing the 12-year cycle of the zodiac. Each year is said to represent the characteristics of that year’s animal, with those born in that year specifically embodying those traits. 2017 is the Year of the Rooster.

How is it celebrated?

Traditionally, Chinese New Year is celebrated over a 15-day period, hallmarked by traditions celebrating family, good fortune, happiness, prosperity, and longevity. Leading up to the new year, families will clean their homes from top to bottom with the intention of cleaning away bad luck to make room for a new beginning.  The Chinese word for “dust” sounds similar to the word for “old”, thus symbolizing the need to get rid of the old to celebrate the new.

New Year’s Eve is a major part of the holiday celebration; families gather together for a large feast. Other customs include setting off fireworks and firecrackers to chase away bad luck and bring in good luck and handing out coins in red paper envelopes to children.

Every part of the traditional New Year’s dinner is symbolic and often represent the themes of the new year. For example, the Chinese word for “fish” sounds like the word for surplus, thus wishing you prosperity; eating two fish, one on New Year’s Eve and one on New Year’s Day, represents a wish for a surplus year after year. Even the way in which the fish is presented and consumed has symbolism. Practices differ regionally, but often the fish head is directed towards the family elders as a sign of respect.

Dumplings, a favorite celebratory food, have the appearance of Chinese silver coins, thus symbolizing wealth. Some customs indicate that more dumplings you eat, the more wealth you will make in the new year. Noodles symbolize longevity and are served uncut, wishing you a long life.

Other Traditions during the Chinese New Year

During the New Year celebrations, the government offices are closed until the seventh day of the first lunar month, and most schools and many businesses are closed. There are many other customs to celebrate the new year.

Often, people will celebrate the new year by praying at temples for good fortune. The Longhua Temple in Shanghai, the largest in the region, hosts thousands of people each year for prayer for the upcoming year. Often, temples will mark the new year with ringing bells to drive away bad luck.

It’s common to share greeting cards with friends and family to spread good wishes for the new year, not unlike the Western tradition of exchanging cards during the Christmas season.

It has been a very long-standing tradition to stay up late to ring in the new year, not unlike the Western tradition. However, in China, it has become a tradition to watch the annual New Year’s Gala on television. The Gala features performances such as acrobatics and musical acts.

Ancestor worship is a common practice, and families will offer sacrifices to honor their ancestors. This practice is performed during the New Year’s festivities, but particularly on New Year’s Day. People often give offerings of food and burn incense.

During the two-week celebration, you can expect many festivals featuring dragon and lion dances, acrobatics, and the crashing of gongs and cymbals.

In the modern era of smartphones and rapid communication, the younger generation often celebrates the New Year in a unique fashion. People exchange well wishes via instant messenger apps, and there is even a phone app designed to exchange “paper” red envelopes with cyber money, representing the traditional custom of giving coins in red envelopes.

The 15-day celebration concludes with the Lantern Festival. For 2017, the Lantern Festival will fall on February 11th. The Lantern Festival is considered on of the most important features of the Spring Festival and has been celebrated for over 2,000 years. New Year’s decorations are taken down and New Year’s taboos are no longer in effect. Lantern Festival customs vary by region, but most light beautiful floating and flying lanterns, set off fireworks, and enjoy lion and dragon dances. Lanterns often feature depictions of traditional images such as fruits, animals, and flowers.

ABOUT US
Taste For Cooking is a website by food entusiasts, for food enthusaists. Nothing more, nothing less. We hope you enjoy it!
FOLLOW US
© 2023 TasteForCooking.com
MORE STORIES
Holidays & Food Traditions