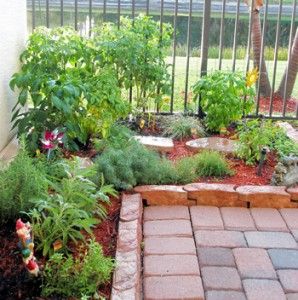 I lost my dogs (13 & 15 years old,) this past October. I was so heartbroken. I didn’t want anything around to remind me of them, and I refused to go to the backyard, which is one of the places we spent the most time with them.

During our next trip to Home Depot, I walked around the garden center. I was drawn to the smell of the fragrant herbs. Then I noticed the price…just $3 for the plant, where I have payed as much as $5 for a small amount of dill.  I chose a few favorites and decided to give it a try. I bought parsley, cilantro and oregano, and although I don’t eat tomatoes often, I grabbed a plum tomato plant as I as excited at the prospect of making my own sauce.

We knew the planter did not have the best soil, so we bought a large bag of organic soil, and then my hubby grabbed a bag of organic compost. Compost? I wanted to have nothing to do with that, but he said if I wanted the best herbs that we should mix it in the soil. The process of mixing the two and getting it all down, took us about 2 hours. By the time we planted the herbs and tomato plant, we were exhausted. Did I mention that the compost smelled like cow poop and was difficult to get off my feet and from under my nails?  Make sure and use gloves and closed shoes!

In less than a week, the tomato plant had yellow flowers everywhere, and I could not contain my excitement when I saw the first few baby tomatoes. I wanted more plants – I had the room in the planter so why not? I did a little research on the Internet and started learning about companion plants. Who knew there were so many things to consider?  I ended up planting sweet basil and chives on either side of my tomato plants, followed by cilantro next to the basil, and then the oregano and rosemary.  Less than a week later, I also bought dill, thyme, tarragon, and mint, which I read repels ants. Last but not least, I planted a few marigold near each tomato plant, as they also deter bugs.

For those of you interested in starting a garden, as you can see from the photo, you can put a lot of plants in a small area.  I invested about $100 and 8 hours my first month of gardening.

ABOUT US
Taste For Cooking is a website by food entusiasts, for food enthusaists. Nothing more, nothing less. We hope you enjoy it!
FOLLOW US
© 2022 TasteForCooking.com
MORE STORIES
Gardening