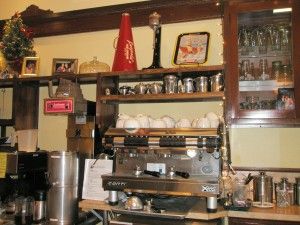 Earlier in the day, we ate at the Wilkes House. I felt that due to its history, and the fact that four generations have been operating the restaurant, it deserved it’s own post.

Midday, we came across the ice cream shop called Leopold’s.  The original shop was opened in 1919.  It is a beautiful store, designed by Academy Award nominated designer Dan Lomino. Dan used many of the original fixtures and applied his Hollywood magic to create the wonderful store you see today. There are props, posters, and signed photographs of actors Dan and Stratton have worked with over the years including items used in the movies Mission Impossible III, The Sum of All Evil and The General’s Daughter.

Much of the décor is original including the original soda fountain, soda fountain cover, back bar, sundae holders, banana split boats, malted milk dispenser, etc., etc., are available and are still being used. Even the juke box and the wooden, interior phone booth from the old store are being used. Great place for sandwiches, ice cream and desserts.

We knew we only had one day left, so we decided to splurge and eat at Vics on the River which was a few doors down from the hotel.  There was an invting piano bar wth a great view of the river.  There was a good selection of seafood and a few steaks.  Several of the sides included Southern fare such as buttermilk mashed potatoes and gravy, collard greens and fried green tomatoes.  We tried the meatloaf ($14,) shrimp and grits ($22) and shrimp bisque ($8). Service was excellent and the food was good, but with so many great local restaurants in the area, there’s no need to spend the extra money to get good food.

ABOUT US
Taste For Cooking is a website by food entusiasts, for food enthusaists. Nothing more, nothing less. We hope you enjoy it!
FOLLOW US
© 2022 TasteForCooking.com
MORE STORIES
Restaurant Reviews