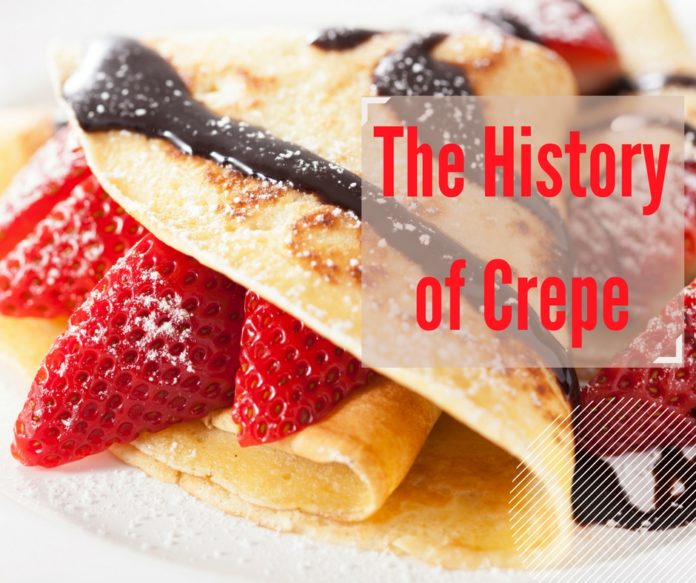 Crepes are a French pancake of sorts that are typically made out of butter, milk, eggs, flour and a pinch of salt. The were invented in Brittany, centuries ago, and have become popular throughout the world. Here’s more information about this delicious food that’s good to eat morning, noon or night.

History
In the past, not much was able to grow in Brittany because of the harsh landscape. However, around the 12th century, they tried to grow buckwheat and were able to grow it successfully. Trying to figure out what to do with this now plentiful crop, meant a lot of experimentation had to be done. They soon learned that if they combined it with water, eggs and a bit of salt they could make a batter. They would heat butter on some sort of hot surface and cook the batter. Then they would add whatever seasonal ingredients they had on hand to it and roll it up. Because of the versatileness of the crepe, it became a popular item. Sometime around the 20th century, white flour started to be used in many households instead of buckwheat because it became very affordable.

-In France there’s a whole holiday dedicated towards crepes. Crepe day, known as Virgin Mary’s Blessing Day, occurs on February 2. To celebrate the beginnings of spring, families come together to eat crepes. There is also a superstition that by holding a coin in the hand you write with while flipping a frying pan with the other hand, if the crepe lands flat on the pan your family will have a prosperous year.

-Crepe making hasn’t changed much over the years. To make the perfect crepe, you need to let the pan heat up first. Then you cook each side anywhere from 30-60 seconds. You’ll know it’s cooked when it looks like a moon. In order to flip crepes successfully, they need to be tossed about 15 centimeters above the pan.

-While many people associate crepes with being sweet because of their pancake shape and appearance, they are actually very versatile. Traditionally they were topped with either lemon and sugar or cheese, eggs and ham. No matter what they are paired with, it’s not uncommon for a lot of diners to wash them down with a nice tall glass of apple cider.

-Originally, wine was often used in the crepe batter. Today, many cooks put hard liquid into it not only for the flavor, but to break down lumps as well.

ABOUT US
Taste For Cooking is a website by food entusiasts, for food enthusaists. Nothing more, nothing less. We hope you enjoy it!
FOLLOW US
© 2022 TasteForCooking.com
MORE STORIES
Breakfast