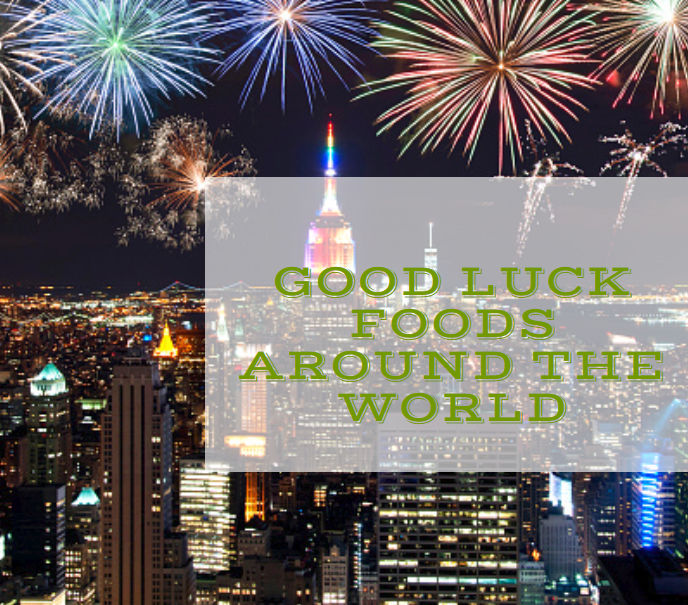 All over the world, different cultures believe that eating certain foods will bring you good luck in the coming year.  Here is a taste of some of the good luck foods around the world and the cultural traditions around those foods.

Pomegranate
Around different parts of the Mediterranean region, pomegranates and their luscious red seeds are considered a symbol of health, abundance, and fertility.  In ancient Egypt, pomegranates were also associated with rebirth, and King Tut was buried with a pomegranate shaped vase to symbolize his reincarnation.

Tamales
In many Latin American countries, tamales are a symbol of prosperity and wealth.  Tamales are often eaten on any special occasion in Latin American households, especially around the holiday season.

Grapes
In Spain, Portugal and other Latin American countries, grapes are a popular good luck food.  Many people believe that eating twelve grapes at the stroke of midnight on New Year’s Eve will bring you good luck in the coming year.  Grapes symbolize the bitter and the sweetness of life. Hopefully, you will get more sweet grapes than sour grapes!

Lentils
The humble lentil is believed to resemble coins and symbolize wealth and prosperity in several cultures, including Brazil, Germany, and Italy to name a few.  Lentils swell after cooking, symbolizing your wealth growing if you eat them. Lentils are traditionally eaten as the first meal of the New Year in several different countries.

Marzipan Pigs
In Germany and Austria, the expression “schwein gehabt” or “having a pig” dates back to Medieval times and means “to have good luck.”  Pig-shaped marzipan treats made of almond paste and sugar are a traditional good luck food around Christmas and New Year time in Germany and Austria.

Chaku
In Nepal, chaku is a popular good luck food that is eaten during the Maghe Sankranti festival, which marks an auspicious period in the Hindu calendar.  It is a sweet treat made from molasses, ghee, and milk and sprinkled with coconut or dates. Chaku is believed to encourage good health and fortune during the Winter Solstice.

Noodles
In Japanese and Chinese cultures, noodles, in particular long, whole noodles are considered a good luck food.  In China, long noodles are associated with longevity. You have to keep the noodle whole without breaking it until it is entirely in your mouth to achieve good luck in the New Year.  In Japan, soba noodles represent the bridge from the old year to the new, and they eaten at midnight on New Year’s Eve.

Black Eyed Peas, Collard Greens & Cornbread
In the Deep South of the United States, the trinity of black-eyed peas, stewed collard greens, and cornbread are often referred to as “soul food.”  The combination has been considered lucky dating back to the Civil War and thought to bring good luck and fortune. The collard greens are said to resemble greenbacks, the currency during the Civil War, while cornbread resembles mountains of gold.  Black eyed peas, collard greens and cornbread are popular good luck foods in the Southern United States, especially on New Year’s Day to ring in the new year.

Other New Year’s posts that may interest you:

What’s In Your Valentine’s Day Chocolate Around The World?