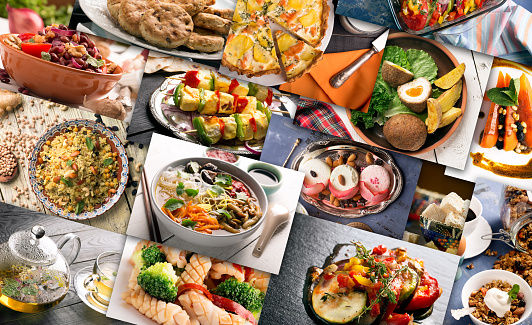 One of the biggest perks of traveling is getting to try new foods. Something that all of us traveling abroad must remember is that in order to experience some amazing dishes, we must keep an open mind. The following dishes are rather unusual, but simply delicious.

While this dish may look unappealing, it’s actually known as a great cure for a hangover. This thick pea soup contains a meat pie as well as vinegar and tomato sauce. While some visitors turn their nose up at this green soup, they really don’t know what they are missing out on.

As word spreads about how good this dish is, it is gaining popularity. Poutine basically consists of French fries served with cheese curds and gravy on top. This dish is packed with flavor and calories!

This is the perfect dish to eat for breakfast. This chewy bread is filled with cheese and sometimes a few eggs. It’s so good in fact that you may just find yourself coming back for seconds.

Many people might think that trying escargot, which is simply snails, would be slimy and gross, but it’s a totally different experience in France. The snails are served in their shell, which somehow preserves the flavor. They are often made with a garlic herb butter and the end result is a dish that just might surprise you.

The dish, Dim Sum, varies greatly on where you eat it at. In Hong Kong it can consist of anything from spare ribs to shrimp dumplings. The key is for it to be in bite size pieces that you don’t need a knife to cut.

This is the dessert of all desserts. It’s made with palm sugar, shaved ice, green rice flower jellies and coconut milk. Some recipes also include kidney beans and corn. Cendol is a refreshing treat for those that have spent the day out in the sun seeing some of the sites of Malaysia.

For those that love fish, they must try Ceviche. The raw fish is cut up and bathed in citrus juices until it is tender. It’s often served with onions, herbs, corn or sweet potatoes.

This dish is very flavorful. The main component of it is rice. A variety of spices are added to it like cinnamon, cloves and saffron. It is also sometimes mixed with vegetables and meat to turn it into an entire meal.

This dish is similar to beef jerky. It’s made with game meats that are salty and dried out. The taste of it can vary depending on where you get it from.

Dumplings are taken to a whole new level with this dish. They are stuffed with things like cheese, mashed potatoes and meat. After they are steamed or boiled they are topped with a type of sour cream called Smetana or a type of pig fat called salo.

ABOUT US
Taste For Cooking is a website by food entusiasts, for food enthusaists. Nothing more, nothing less. We hope you enjoy it!
FOLLOW US
© 2022 TasteForCooking.com
MORE STORIES
Appetizers