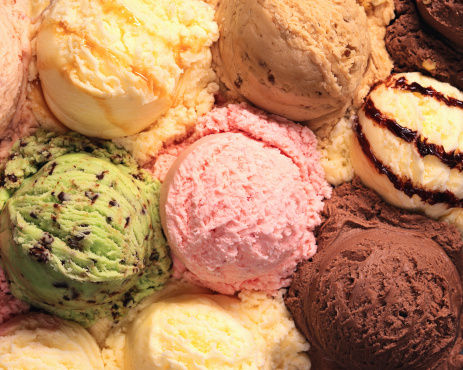 July certainly is hot! One of the tastiest ways to cool off is to enjoy a bowl of ice cream. After all, July is National Ice Cream Month. President Ronald Regan declared that the whole month of July should be dedicated to ice cream in 1984. In honor of this month we’ve put together some interesting facts about this cool desert as well as a simple recipe to make ice cream at home.

– In order to make just one gallon of ice cream it takes about 12 pounds of milk.
– In the United States, about 48 pints of ice cream are consumed per person each year. By far the U.S. consumes the most ice cream in the entire world.
– The ice cream cone was invented in 1904 at the World’s Fair. The vendor that was selling ice cream ran out of bowls, but still had plenty of ice cream left so he had to get creative. He talked to a nearby waffle vendor and they rolled the waffles into cones and put the ice cream in it.
– Have you ever wondered how many licks it takes to eat one scoop of ice cream? The answer is about 50.
– Christopher Columbus is responsible for bringing ice cream’s recipe to North America.
– When most people eat ice cream too fast it causes what’s known as a “brain freeze”. This is caused by the blood vessels in the head dilating when the cold ice cream touches the roof of the mouth.

Make Your Own Ice Cream

Ice cream can be made pretty easily. You don’t need a special machine or a lot of time. All you need are two sealable freezer bags. The following ice cream recipe is not only simple, but something you can get the whole family involved in.

To Make:
Pour the milk, sugar and vanilla in one of the freezer bags and seal it. As you are sealing it, squeeze as much air out as possible. Put the bag inside the other freezer bag. Put the ice in the second bag so that it surrounds the sealed bag. Sprinkle the salt on top of the ice. Seal the second bag. Wrap the bags with a towel (this is to keep your hands from getting too cold). Shake the bags vigorously for about 5 minutes.

Adults Only Ice Cream And Where To Have It

ABOUT US
Taste For Cooking is a website by food entusiasts, for food enthusaists. Nothing more, nothing less. We hope you enjoy it!
FOLLOW US
© 2022 TasteForCooking.com
MORE STORIES
Dessert